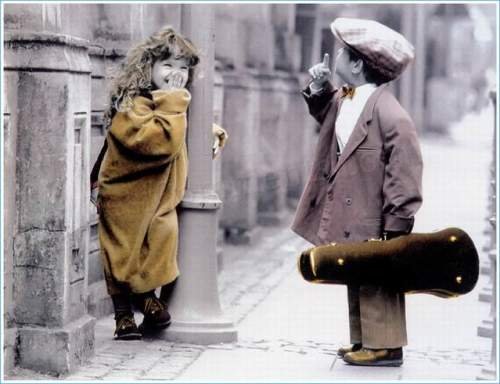 A boy’s love is expressed differently from that of a girl.. and no I am not talking about just the dubbed love love relationship between a boy and a girl.. This is bigger.. This is about the love and affection between friends.. between best friends…

Boys show their love differently than the way the girls would show theirs. If girls could really grasp this fact, relationships all over the world would improve. What happens in most cases is that the girls show they love in warm, mushy ways. They talk…, They share everything (or at least as much as the boy will tolerate listening to), They provide nurture and support. But boys are very different and you know this already.

The problem is the female species have spent centuries judging the males for love instead of receiving it as the display of love it is. So when the boy gets past the courting phase, becomes solidly committed to the relationship, and the display of affection or compliments begin to fade, then the girls join the legion of sisters who complain either with humor or bitterly about how he just doesn’t measure up to the ideal of what their real boy is…

Let me tell you, at this point the relationship is in danger of ending and it ain’t the boy’s fault! to explain my claims let me share how the real boy loves and see if you can’t begin to look at him through a kinder lens and a heart warmed by just how very much he actually does let you know he loves you.

There are three ways a boy clearly and definitively shows his love and affection. The first thing the boy does when he knows he loves you and is ready to commit to the relationship is he professes who you are in his life. He calls you as someone who he posses really close to himself…He calls you in a special way….with his words and with his body language. You can see it in the eyes and body language of the folks in his world you are introduced to. You see that spark of recognition that you are different from the other girls he has introduced his friends too… His claim on you is obvious.

The second thing the boy does when he knows he loves you and is ready to commit to the relationship is he provides for you. Now, not every man has the means to buy you expensive things, but to the degree he is able, he will provide for you. One simple example is if you have trouble and ask him for help, he will do everything within his power to assist you in getting it fixed. The boy might be able to resolve the problem entirely… while the other might be able to fix a few things… But nevertheless you should know that the real boy in love wants to provide for you by all his ability and means… Everyday might not produce a perfect conversation or outing…, but in any way he sees he can provide for you and is able, he will.

The third thing a real boy does when he is head over heals in love is he protects. No one is allowed to hurt, insult, or disrespect the girl. He will not be able to tolerate her life or her spirit being in danger. and In my own experience, I have observed two important things about a men’s desire to protect his woman. The first is that He will attempt to protect her from herself. This is why a the man can become infuriated with some of the choices the woman makes because, as a man with his logical thinking, he could have told her this or that choice would be a big mistake. How could she have put the woman he loves most in the whole world (herself) in harm’s way? The other thing I have observed is that a real man in love will sacrifice himself to protect you from himself, if you require it. If you cannot abide him being who he is, expressing himself as a man, he will shrink inside, becoming less effective as a lover and as a partner as he attempts to protect you in the way you say you must be protected. He will not do this indefinitely. At some point, the pressure to express himself as a man will pop and you will lose him. One way or another you will lose him. However, if you find you are no longer invested in exploring the marvelous mystery he is, you might take a look at whether or not you really love him. Because asking him to stifle his masculinity is the
beginning of the end….

Life is an eternal quest about knowing oneself.... I do my thing and you do yours. I am not in this world to live up to anyone's expectations; thereby a real loner in the crowd. Having said that, I believe that I am enough of an artist to draw freely upon my imagination. With the heart that feels and the mind that thinks...I am not myself in any degree ashamed of having changed my opinions a billion times to reach a correct conclusion. Without knowing what I am and why I am here, life for me is impossible. I just love to study how things came into being, Love to watch the impressions created on the sand of time. You would see me talking to myself and the reason I talk to myself is that I'm the only one whose answers I accept and I would like to be what I am. I like it that way. I also call myself a militant pacifist. As I am willing to fight for peace. In matters of fashion I flow with the current, but In matters of principle I am like the stiff rock in the ocean that is not moved by any of the waves. At the same time I realize that there are six billion people living, with another six trillion principles to a particular thing. Modestly, I would love to know them all and see If I can break that stiff rock of the ocean. Looks, Status, Wealth are of no real significance for me. What I aim for in my self and look in other people around is Wisdom, Modesty, Good Character, Honesty and Credibility.. These things are really important.. When I am saying being a good character, There are a lot of people who have defined it their ways. But I simply mean "doing what is right when nobody is looking" and When I say credibility, That is when they practice what the preach. those are the lines of my thought !! View all posts by Ali

One thought on “the ideal relationship”